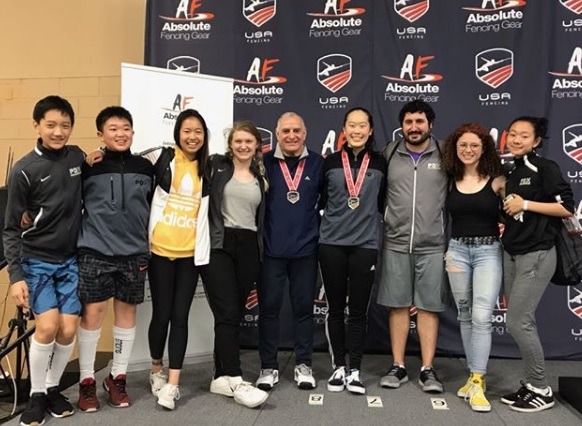 PDX Fencing is led by Charles Randall. Charles has coached saber exclusively for over 30 years, including the Women’s Div. 1 Saber team in Mexico, and a number of National and International champions in the USA and Mexico. He knows how important it is to treat every athlete like an all-star, no matter how young or old they are. Over the years he has developed a powerful youth and adult program that has helped thousands of fencers love the sport and reach their potential, while enjoying the game more and more each time they play. His hand picked staff of well seasoned, accomplished coaches share his philosophy and have taught students to strive to reach for their maximum potential.

At PDX Fencing our mission is to empower the youth or adult student to love the game, help them master the fundamentals and reach their potential - on and off the strip

You will be surrounded by a happy, engaged community of positive people helping each other thrive.

With PDX Fencing core values based on integrity and strong self worth, we strive to build self confidence, critical problem solving, poise and a healthy body. All of the necessary tools for the future.

Charles Randall has been fencing exclusively saber since he was in grade school. He came to the attention of the legendary fencing master, Giorgio Santelli who was an Olympic Gold medalist, and 5 time U.S. National Olympic coach. 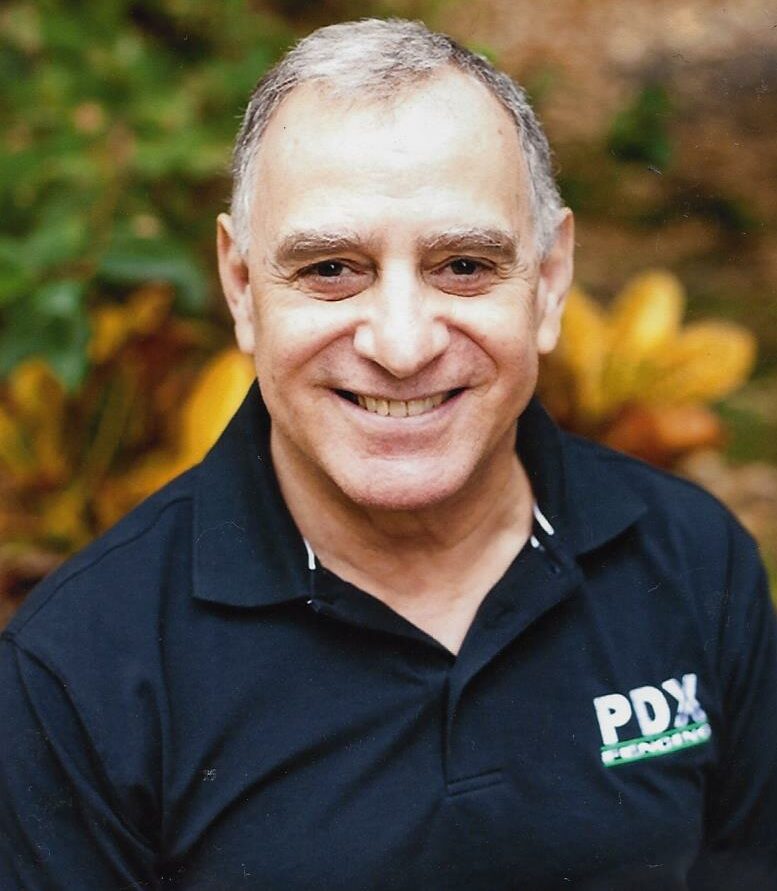 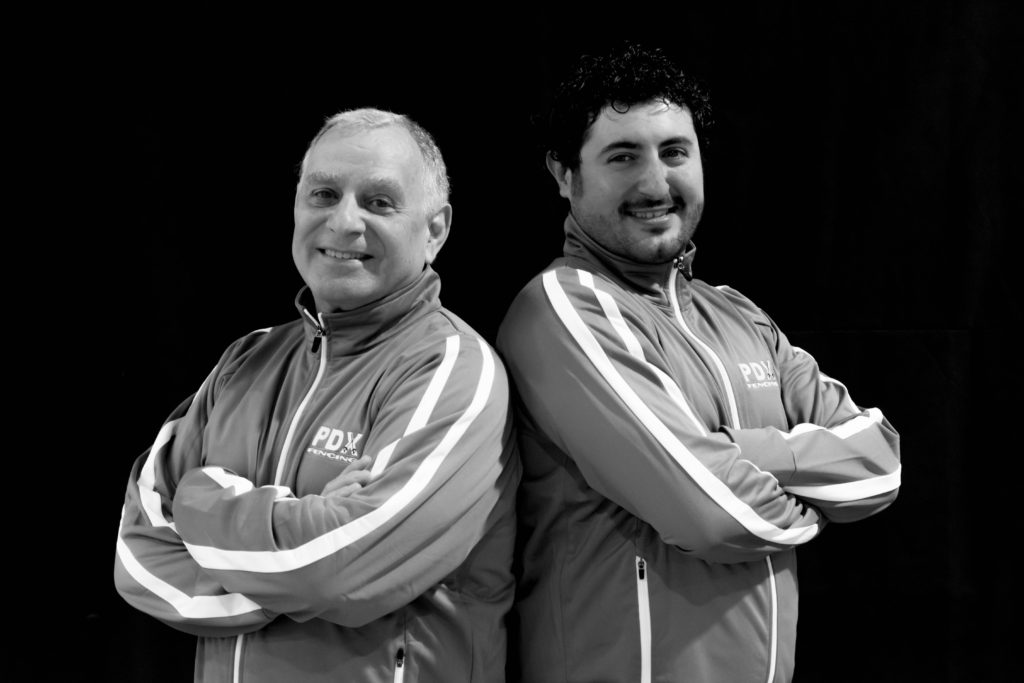 At PDX Fencing we’ve developed a program that has proven to get the athlete to where they want to be. Our founder, Charles Randall, developed this system based on years of experience as a competitive fencer and coach. He has introduced thousands of children and adults to saber fencing, and help students perfect their skills, achieving beyond what they thought was possible. Many of our young athletes get recruited by some of the most respected colleges and universities in the country.

All coaches at PDX Fencing are certified with SafeSport and USA Fencing, and fence saber exclusively. Their love of the sport and strong family values permeate the atmosphere as they share their knowledge of sports and life with students of all ages and fencing levels. All coaches were/are students of Coach Randall’s and share his philosophy of athlete first.

Your team will thrive on learning something new and exciting

Lets unleash that inner musketeer for an unforgettable party

At PDX Fencing skilled experts lead and teach developing athletes age appropriate conditioning.
Being fit and in peak shape is the key to being able to perform at one's maximum potential. The ability to execute physically what the athlete is demanding of their body requires special physical conditioning, nutrition, and hydration. It is the key to injury prevention. PDX Fencing's fitness program incorporates tournament timing into all work-outs.

Our Fitness Team - the key to injury prevention

Fancy is a high performance fitness coach. She was an NCAA PAC 12 track and field athlete. Her inspiring workouts push people to achieve their best. She is a sports mental training coach, and coaches individual athletes in track, field and basketball when she is not at her own work-out studio. 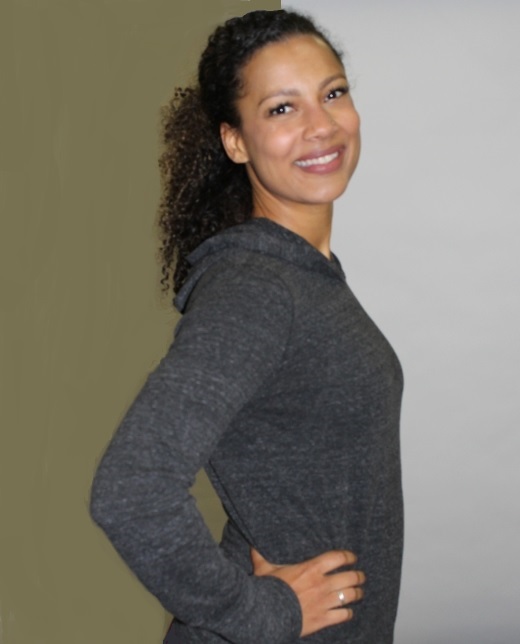 Lucretia "Fancy" LakeFitness Coach
Yoko is a certified yoga and pilates instructor. Her focus is on flexibility, agility, breathing, hip stability and mobility. As a fencing mom and fencer herself (as of 2019!) she understands the demands on a fencers body and tailors her classes for maximum benefit. 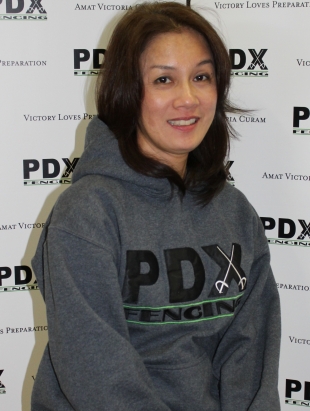 YOKO OISHIYOGA/PILATES INSTRUCTOR
Kara Gajowskj is a certified youth fitness trainer with additional certifications in yoga and pilates. She is a tennis pro, fencing mom, and has fenced herself. She co-ordinates all the workouts so they work different areas of the body for optimum fitness and injury prevention. 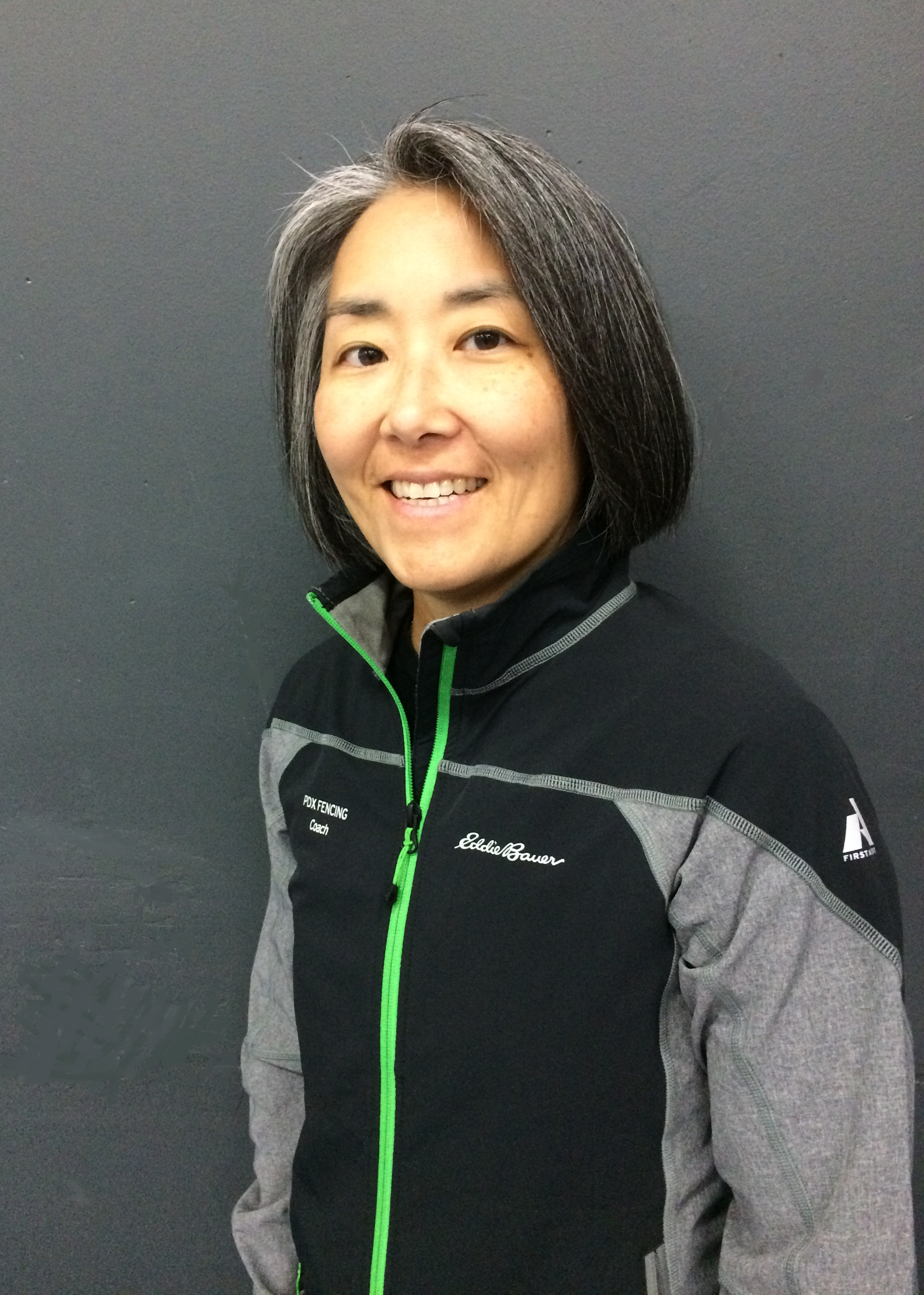 kARA gAJOWSKJFITNESS/YOGA/PILATES
Adam is the founder of Parkour Revolution and our first fitness trainer. He teaches our kids to love to work hard stay in shape. His inspiring workouts keep everyone flexible, active and motivated. His years as an Adapt fitness trainer show as he pays strict attention to correct technique and form. Adam is currently a guest trainer here several times a year. 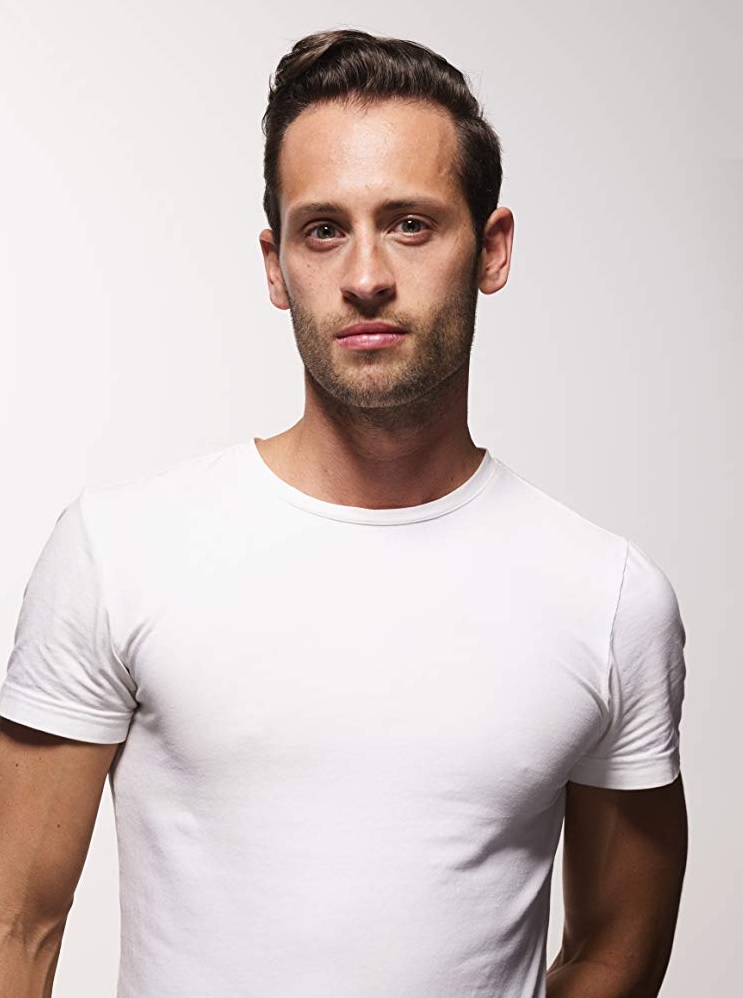 ADAM DUNLAPPARKOUR/FITNESS`
Jaime has multi-disciplinary degree(s) in health, nutrition, and exercise science. Her practical work experience includes more than 8 years working with kids & teens focusing on exercise, self esteem and nutrition. She is a competitive athlete in fencing, soccer and kick-boxing. Her kickboxing- cardio workout classes are a club favorite. Her attention to correct technique in each phase of exercise helps each athlete to maximize their workout. 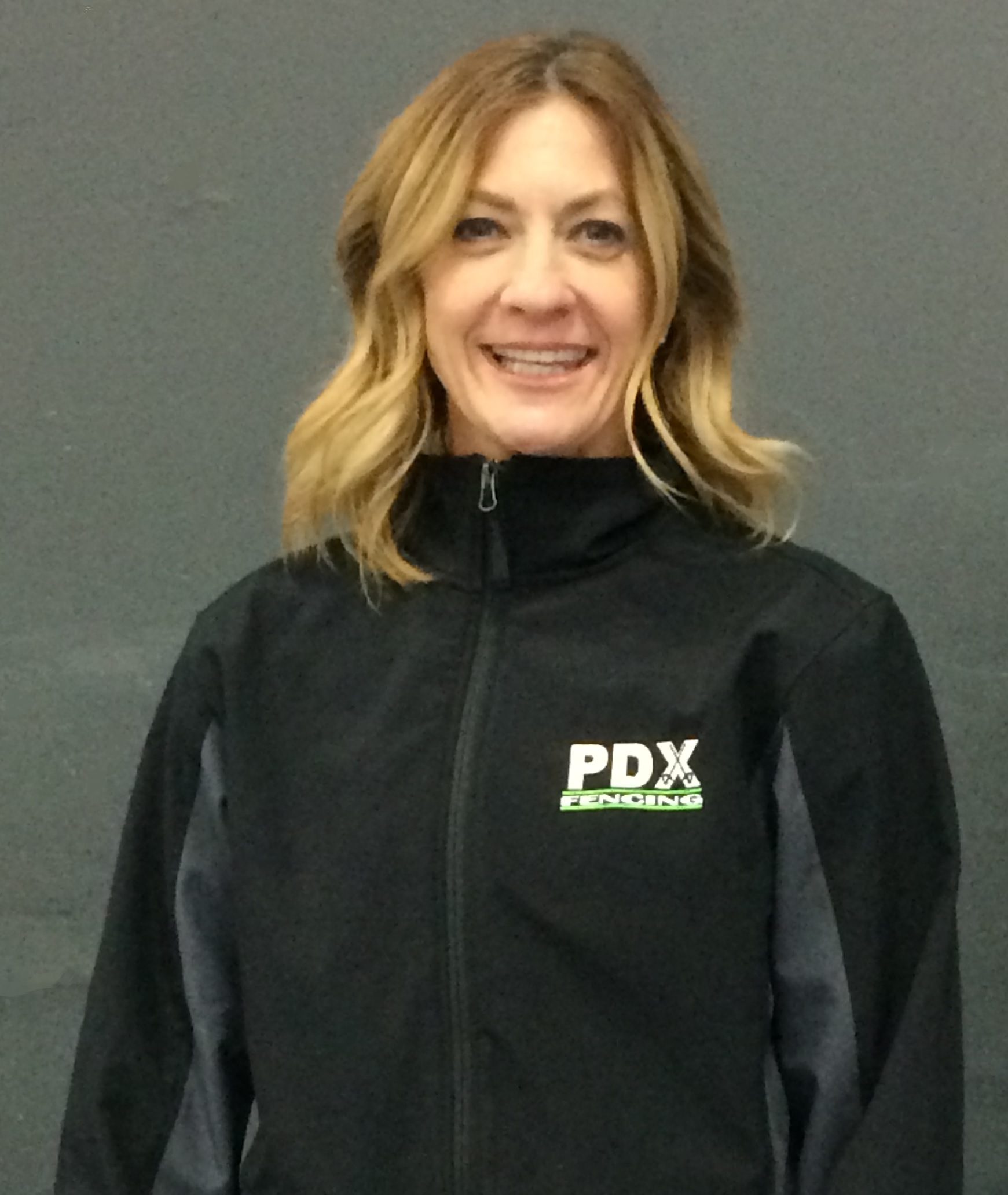 State of the Art Facility

Our facility is equipped with special sport court flooring, making movement easier on hips, knees and joints. Heated, air-conditioned, with limited spectator seating with physical distancing, WiFi, gear shop, reception area., video replay system, and closed circuit t.v throughout. We have a quiet homework and work area for those waiting for class to start or end, and snack and drink machines.  Sanitizing, and cleaning protocols along with CDC protocols are strictly followed. Check in procedure at the door for screening include temperature taking and mask or face shield requirements. Air sanitizers in the  front reception area and in the fencing area along with cleaning stations and hand sanitizers throughout the entire facility.

PDX Fencing is conveniently located in Beaverton, Oregon right off the 217 Freeway at the Allen Blvd. exit. We serve everywhere the Portland airport serves including: Beaverton, Camas, Hillsboro, Lake Oswego, Oregon City, Portland, Sherwood, Tigard, West Linn,  Vancouver, Wilsonville, we have even students coming in from Canby and Rainier.